I have a love-hate relationship with the Electronic Health Record (EHR).

To be precise, it’s 90% hate, 6% love. The missing 4%? That would be the percentage of time spent on the phone with tech support trying to figure out which order set I have to use to input percentages.

I’ve been in practice long enough to straddle the transition from paper…to even more paper (thanks EHR, you’re the logging industry’s BFF). In fact, I was on call as a hospitalist the day our facility’s EHR first went live. (I can’t tell you the name of the software vendor, but I’ll say this: despite its name, IT WASN’T).

Given the chaos that ensued that night, I half expected a Terminator to materialize from the future, snuff out my intern, and relay in gruesome detail how this horrendously complex and clunky software would soon become sentient and attempt to destroy mankind—all while billing Medicare an insanely over-documented 99239 “d/c human race” code. You can’t blame it for obeying it’s programming—the software’s prime directive is to maximize the documentation of billable episodic transactional care widgets, right? Hence my “1000 point review of systems negative except as noted nowhere” template.

If it hadn’t wrecked the beautiful narrative of our notes, added hours and hundreds of click boxes to our already overflowing workload, and further isolated every island of fragmented care from every other, one of those little Workstations on Wheels (WOWs…don’t you dare call them COWs!) could make an adorable computer-animated character in a Pixar film. Call him Wall-EHR. A baby with an interface only a coder could love.

Those who’ve worked with EHRs from the beginning, and those who’ve known no other reality (sorry, Millennials) sometimes claim they’ve grown to like, even love(!!) their EHR. I consider this a particularly worrisome form of Stockholm Syndrome, wherein these docs and nurses begin to identify with their tormentor. Can one guy’s waterboarding be another guy’s brisk shower? Here’s why this isn’t acceptable:

Simply put, the Tower of Babel of existing EHRs may not ever talk to one another, but they do share one thing: they come between us and our patients. Staring at a screen to click boxes and satisfy quality measures while figuring out the seventeenth digit for an ICD-10 code—this nonsense robs us of precious time and attention that should be spent on and with patients. I would never advocate going back to paper. Ever. But we need to demand technology that binds us closer to those we care for, technology that lets doctors be doctors. And nurses, and RTs, and case managers, and dietitians, and scrub techs—[insert crucial care team member here].

We on the front lines of healthcare need to stand up and demand that our organizations, government, and tech vendors stop letting the unintended consequences of legislation and technology wreck our sacred relationship with patients while destroying our ability to do what we do without having to tell our kids to stay as far away from medicine as they can. Great technology [insert Steve Jobs fanboy comments here] can be the glue that connects us, so let’s make our voices heard and tell ’em what we want—and need. Health IT policy and technology are constantly evolving, so why should the care team’s voice stay silent? It’s OUR frickin’ workflow, let’s take it back! Leave your gripes—and more importantly your constructive feedback—for the powers-that-be at #LetDoctorsBeDoctors. Your feedback will be brought to policymakers in Washington, DC who are interested in producing legislation to improve the EHR experience. They’ll have to listen if enough of us stand up together and shout. Or rap. Or whatever, just go do it!

The legendary Devin Moore produced and engineered the track from scratch, AND sang the most amazing Alicia KeysBoard rendition that was still street legal in the state of Nevada. If you love him, hit him up on his band Rabbit!’s Facebook page!

Tom Hinueber and Logan Stewart of Variables of Light absolutely KILLED it on the video production, as per routine (see also Bad Skin and Readmission).

Lyrics and rap by Jay-ZDogg, with an assist from Facebook fans Sarah Ann Henderson, Elizabeth Murray, and Cristy Miles with many others providing inspiration.

The real medical peeps appearing in the video:

Special Thanks to Dr. Bob Wachter for sharing with me the great EHR chapter from his new book, The Digital Doctor.

Get ZDoggMD to come speak in YOUR healthcare ‘hood!

First Verse:
Yeah I’m out that paper, no more chasing med records
Writing so illegible, that I’ll be HIPAA foreva
Bought the new software, and though we use it here
I can’t use it over there, different systems everywhere
I used to chart on paper, all of my verbals recorded
Mix up with the ward clerk, turned “diluted” to “dilaudid”
Switched me to that EMR, meaningless abuse, G
Now catch me at the nurses station mashin’ that F2 key
Notes used to be our story, narrative, but yo
Replaced with copy paste, now a bloated ransom note
Me, I’m at that bedside, focused like a laser beam
On the patient, naw come on, I’m treatin’ the computer screen
8 dozen warnings, click check boxes
Alarm fatigue, vaseline conflicts with doxy??
Nurses they be burned out, we could use some OT
Tell by our wrist guards that we most definitely on
First Chorus:
EHR, crappy software some vendor made us, there’s nothing you can do, stuck with EHR, best practice pop ups will tire you, complain and they’ll fire you, we need a new chart new chart new chart
(you’re welcome, they built you a turd doc!)
Second Verse:
Catch me on the phone with IT beggin’ tech support
Shoot, it’s like IT and me be stuck in 1994
Innovation all around, but it ain’t in healthcare
Internet and apps for you, but we get ancient software
Welcome to that EHR, Go Live and it don’t stop
Uncle Sam promoted it, but gone is the interop
CMS, EMS, PMS, holla back
For doctors it ain’t fair, these vendors act like they all kinda wack
8 million stories, out there docs can’t take it, after this disaster half of y’all won’t make it
How to train your Dragon: “hotmail” isn’t “Hot Male”
If some be saying it’s epic we sayin’ it’s epic fail
Electronic silo, team not talking
Paperless they say, but whole trees we droppin’
Props to case management
Long live the RT
Long live the pharmacist, whole team definitely hates
Second Chorus:
EHR, just a glorified billing platform, with some patient stuff tacked on, give us a new chart, ICD-10’s a disaster, meet your new robot master, we need a new chart, new chart, new chart
(this chart wack, welcome to the apocalypse doc)
Third Verse:
Tech should bind us, connect, not blind us, to the reason why we care,
Patient’s face reminds us
Designs like Epocrates, that tap the app agilely
Then magically the team works, let’s bite the Apple, Steve
Caught up in the in-box, now you’re in-sane
Good docs gone mad, the clinic’s filled with them
Nursing, they the heart of everything
Data entry got ‘em hurtin’, life starts when the shift ends
10 years of school, graduated to the OR
Mommy busts a Whipple she deserves a better damn chart
Autocorrect turning Chantix into Champion
Patient needs a sleeper, 30 clicks for a Ambien
Third Chorus:
EHR, crappy software some vendor made us, there’s something you CAN do, give us a new chart, stand up and make our voices heard, let doctors be doctors, we need a new chart new chart new chart
(Stand up, the whole team) 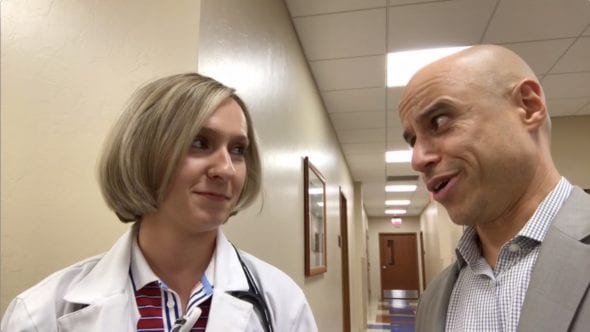 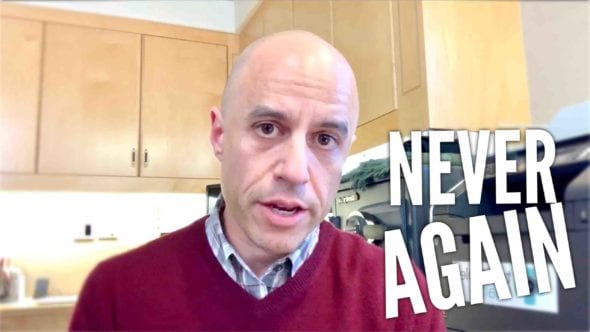 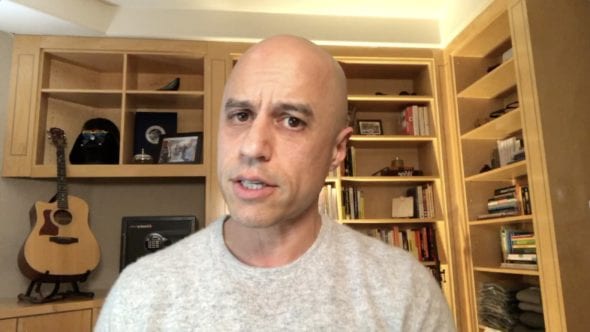 The Hard Truth Behind That Baltimore Patient Dumping Video 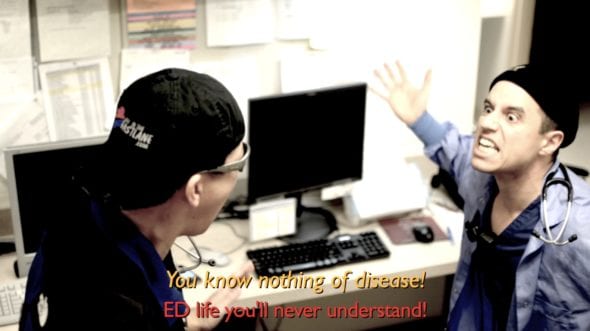